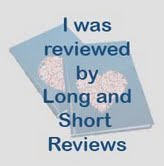 It always makes my day when someone shares a nice review with me (especially now that Deadtown has been out for nearly five months). Today I got word that Long and Short Reviews had put up a review of the novel.

Some of my favorite excerpts:

In the mood for a dark, sexy, urban fantasy? Then step into Deadtown, the first story in a series that is as refreshing as it is complex. It’s been a long time since I’ve been swept away by a story, and I can assure you that once you delve into the world created by Nancy Holzner, you will be eager to return for a visit.

Fans of urban fantasy will love Deadtown. It’s something new in a genre saturated by more of the same. If you’re in the market for something different, be sure to place this title on your TBR list.

As I’ve mentioned here a couple of times, I’ve been pushing hard at my day job lately, and this gave me a much-needed boost as I head into the home stretch on the big project that’s been taking up all (and I mean ALL) my time.

You can read the full review here.

Working in my PJs

Despite saying last week that the thrill of working in my PJs has worn off, I’ve been indulging in that particular facet of working at home lately. Working in one’s PJs might sound lazy, but really it’s not. I get up, grab some coffee, turn on the computer, and get right to work. I don’t have time right now to do more than that. The whole shower-and-getting-dressed thing revives me at the end of the day.

One of the reasons I don’t like to work in my PJs is the doorbell. It rang yesterday afternoon, at a time when all reasonable people are wearing actual clothes. You know, the kind that aren’t embarrassing when you wear them in public. I considered not answering—I’m still trying to make that tough deadline and don’t have a lot of time for interruptions. But the doorbell kept ringing, so I stomped down the stairs to answer it.

I don’t like to imagine what I looked like when I answered the door: T-shirt, pajama bottoms, slippers, and hair that may or may not have been brushed today. Not to mention the scowl of someone who has to make time she doesn’t have. The poor guy on my porch probably wished he hadn’t pressed the doorbell those last three or four times.

Census taker. Now, I returned my census form on the day I received it, precisely because I didn’t want to forget and then have to answer the door to deal with a census taker some day. But our house used to be a duplex, and it was listed as two residences, so we got two forms. I returned one of them, with a note that explaining that there were no longer two apartments at this address, just a single-family home.

Apparently, that wasn’t good enough. The census taker—who was very nice, very polite, and did an excellent job of covering up his reaction to the terrifying apparition that answered the door—filled out a form to say that no second apartment existed at this address. I gave him the information he needed, hoping none of the neighbors was checking out my attire as I stood on the porch looking like last year’s scarecrow. And that was that. Presumably, that same form was available in the Census office and could have been filled out by whoever ignored my note saying the exact same thing and instead put my house on the list of addresses to visit. Not that I’m annoyed or anything.

You’d think the moral of this story would be don’t work in your PJs. But no. I’m sitting here in my PJs as I type. I think the moral is more along these lines: If you want to visit me during daylight hours, call first. Or better yet, wait a month. I should look like a human being again by then.

2 Comments | posted in The writing life

All Work and No Play…

…makes Nancy a dull girl. It’s true. But sometimes you can’t do much about it. I’m currently working 80-hour weeks to meet a tight deadline on a nonfiction project. It’s a good project, and I’m grateful to have it. But for the next 3-4 weeks it’ll eat up all my time.

When I switched from being employed to being self-employed, I had many of the typical fantasies about working at home. I could be my own boss, set my own hours, take time off in the middle of the work day if I felt like it. And those things are true—usually. I love working at home. I’m not a morning person, for example, and it was always hard for me to be in a classroom or an office by eight in the morning. And even after the thrill of working in my PJs wore off, it’s still nice to throw on a pair of jeans and a sweater and be all dressed for work.

But there’s a flip side. When you work at home, the work is always there. Yes, I can close my office door and go downstairs, but it’s not uncommon for me to head back upstairs at 10:00 p.m. to put in a couple more hours before I go to bed. And weekends are regular workdays (except on weekends I’m less likely to get email I have to answer). I took Sunday off for Mother’s Day, but that’s my last day off for a month.  When I’m getting squeezed by a deadline like I am now, there’s not much choice. My publisher is relying on me to help them meet their schedule, and it’s in everyone’s interest for me to hold up my end.

But for a while, everything else falls by the wayside. I’ve had to ask for an extension on my Hellforged revisions. A couple of other creative projects are on the back burner—they’re simmering away, but I’d rather be stirring up the pot. And I haven’t had time to post much here or interact with people on Facebook and Twitter.

I’m not complaining. Nonfiction lets me make a good living as a writer. And rushing to meet deadlines is part of the feast-or-famine nature of freelancing. It’s part of the writing life, and I love the writing life. Most of the time. But I can’t really think about that now; I’ve gotta get back to work.

4 Comments | posted in The writing life 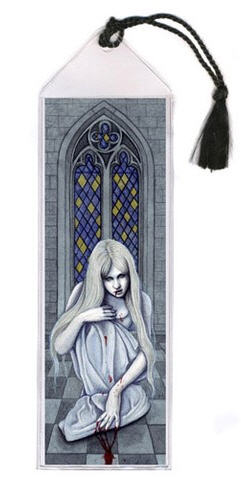 To help celebrate Amanda’s birthday, I’m guest blogging today for Not-Really-Southern Vamp Chick. Amanda is turning 25 this week, so I did a quick survey of vampires in popular culture over the last 25 years, from The Vampire Lestat through the phenomenon that is Twilight.

Who are your favorite vampires from the past 25 years? Where do you think vampires might be headed in movies, TV, and books? Come share your thoughts, and you could win a Birthday Bash prize package:

So stop by, wish Amanda a happy birthday, and enter to win!

Yesterday I took my parents out to lunch for Mother’s Day. I hadn’t seen them for a while, and it was nice to sit down, spend some time together, and catch up. With 200 miles between my house and theirs, we don’t do that often enough.

My mom has always been great with kids. She began her career as an art teacher, took a break to raise three daughters to adolescence, and then returned to teaching as a special-needs teacher at an elementary school. After she retired, she was active for years as a substitute teacher. Kids love her. She’s warm and motherly and pays attention to what they have to say.

She’s been a terrific mother to me, loving and encouraging. She supported me in things I wanted to explore, like music and writing. She was proud of my academic achievements. Although we sometimes had our differences during my teens years, we grew closer again after I did some growing up. After my daughter was born, she stepped in to help when I needed her. My daughter has always been close to both my parents, and I treasure their relationship.

And Mom always believed I’d become an author, even when I headed down half a dozen other paths. When we met for lunch yesterday, she was carrying her copy of Deadtown, which she’d brought along to read on the drive. It’s not her style of fiction, and I’m not quite sure what she thinks of it, but she’s proud of me for writing it. 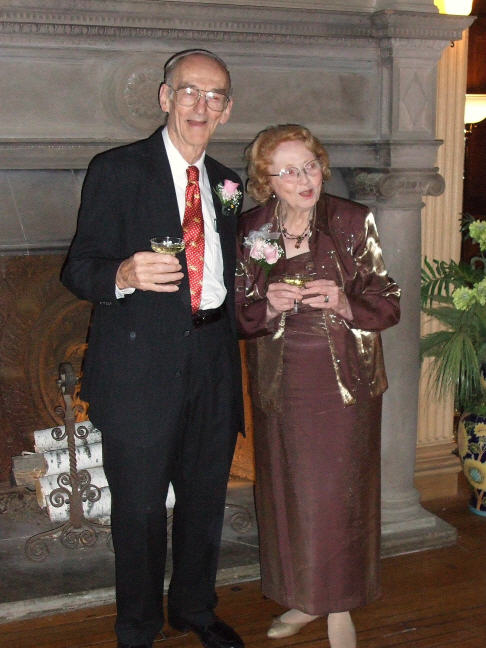 My parents at their 50th anniversary party