In pursuit of single-tasking

My Internet vacation last weekend left a lasting impression. It didn’t change my behavior as much as I would’ve liked, but I’m working on that.

During the week, I came across the article Is the Web Driving Us Mad? through a link on Facebook. It’s worthwhile reading. If you read it, I’d love to hear what you think.

For me, the biggest two pitfalls of the Web are (1) procrastination and (2) distraction. As I’ve mentioned before, when starting work seems hard it’s very easy to say “I’ll just take a minute to scan the headlines” and then get sucked into a maze of stories and links and blogs and more links and videos . . . I end up with several windows and tabs open, switching back and forth and never fully absorbing any of it. Before I know it, I’ve spent half an hour reading Postcards from Yo Momma (admittedly hilarious, with the added benefit of making me feel like one of the same moms) or some other site. And my writing time is slipping away.

Writing a novel takes concentration. It takes immersion in the world of my characters, so I feel like I’m there with them, recording what they’re saying and doing. If I’m constantly pulling myself away to finish a blog post or check my email, I break that spell. Besides, it’s rude, like someone who can’t stop texting when you’re trying to have a conversation. 🙂

So I’m going to continue to limit my Internet time in order to improve my focus. Multitasking is great, if you can do it. I can’t. It leaves me feeling scatterbrained and grumpy–qualities that getting older is already supplying me with, thank you very much. So my new motto is “One thing at a time.”

Here’s my plan: On weekdays, I’ll restrict online time to afternoons and evenings. That will let me get my writing done in the morning, which is when I seem to work best. On weekends, I’ll stay off the Internet altogether. I want to try doing this strictly at first, because it’s so easy to slip back into old habits. If things go well, maybe I’ll loosen up eventually–or maybe I’ll prefer the new way. Anyway, if I’m not around in the mornings and on weekends, you’ll know why.

One of the benefits of my Internet hiatus last weekend was that time stretched out before me almost the way it used to when I was a kid. I could actually stop and think, “What do I want to do now?” (As opposed to my usual, “Oh, no! Look how late it’s gotten! And I still have x, y, and z to do!”) I hope to use that time to write, to read, to spend more time with my husband and friends, and to do some creative idling. Sounds good, doesn’t it?

On Friday, I decided to unplug for the weekend. I’d been spending way too much time staring at a computer screen (or, when I wasn’t near a computer, at my smartphone), and although I was meeting my work-related commitments it seemed like my days vanished before they really got started.

I gave up most television-watching years ago to give myself time to write. But recently the Internet has easily won the prize for Biggest Time Suck. I’ll tell myself I’m just going to scan the headlines to see what’s in the news  . . . and the next thing I know two hours have zipped by and I’m on some obscure Wikipedia page looking up something I never even really wanted to know.

What I really wanted was time. And I decided to use the weekend to claim it. I’d take my computer offline, and I would use my phone only as (gasp!) a phone.

Withdrawal wasn’t as bad as I’d expected. On Saturday morning, I realized that getting out of bed meant I wanted two things: (1) coffee and (2) to check my email. I poured myself a generous mug of coffee while I let the idea sink in that I wasn’t going to check my email that day. Or the next. Uh-uh, forget it. Anything in my Inbox could wait until Monday.

I turned on my computer and took a minute to disconnect it from our home network. Now, I’d have to take extra steps, connecting manually, to check my email or see how my Facebook contest was doing. And then I got to work. I wrote for several hours with good concentration. I sailed past my word count goal for the day. And it was only lunchtime.

I ate lunch with my husband instead of at my desk. I took an hourlong walk. I read. I called my daughter on my phone-that’s-just-a-phone. The day grew longer, but in a good way. I had hours at my disposal–time for thinking, relaxing, reading, writing, idling. It was the kind of Saturday I used to enjoy before freelancing turned every day into a workday.

Sunday was even better. I woke up without that urgent need to check my email. Because my last freelance project had pulled me away from my current novel, I reread everything I’d written so far on Deadtown 5 to re-immerse myself in its story. Doing that can be dangerous in a rough first draft, but it gave me momentum, opening doors to new scenes and making me eager to keep writing–which I did.

During the weekend, I went online only twice. My husband, who’s visually impaired, wanted to buy something on Amazon, so I helped him do that. And I needed a recipe that I’d bookmarked but never printed out. I don’t consider those cheating, because I avoided the time suck of opening multiple windows and tabs and following endless links. Plus it didn’t seem fair to say to my husband, “You have to wait two days because I’m staying off the Internet.” (Even so, it was interesting to note that what should have been a quick five minutes of booting up, finding a product, and buying it turned into 20 minutes of sifting through reviews and comparing similar products.)

On Sunday evening, I was hearing the siren call again: “The weekend’s all but over. You surpassed your writing goals. You can just take a quick peek.” I didn’t. I enjoyed a relaxed evening with my husband.

My Internet break was so successful that I think I’m going to try it every weekend for a while. So if I’m not around on Saturday or Sunday, you’ll know I’m writing. Or reading. Or taking a walk. Or hanging out with my hubby. Or just doing whatever . . . in the honest-to-goodness, actual, real world.

Taking the weekend off

After a blog tour and a project that refused to respect normal working hours, I’m taking this weekend OFF. That means staying off the Internet entirely. No news, no blogs, no Facebook, no Twitter, no email.

If you’re looking for me, I’ll be back on Monday.

Guest post by Axel TODAY at Bitten by Books

Today my blog tour continues at Bitten by Books. Axel, the Creature Comforts bartender, muses on life in a monster bar in the New Combat Zone. Axel doesn’t usually talk much, so come and hear what he has to say.

Plus I’m giving away a $25 gift card to either Amazon, B&N, or The Book Depository (winner’s choice). Click the link below to enter.

A recurring theme in my life, especially over the past five years, is that I don’t make enough time for fun. But yesterday, I did. I spent the whole day with Deborah Blake, a writer friend who lives about two hours from me, and we went to the Glimmerglass Festival to see the opera Aida.

I got the idea several months ago. Tickets were already going fast. I’m a Verdi fanatic and had enjoyed the Glimmerglass production of La Traviata a couple of years ago. Deb lives about half an hour from the festival, so I thought it would be a good chance to get together, talk writing, and see the opera. We made plans, I bought tickets, and we were committed!

It was a great day. The weather cooperated (thunderstorms were forecast, but the rain didn’t start until I was back in my driveway at the end of the day), so Deb and I got to enjoy a picnic lunch, complete with glasses of sparkling wine, on the festivals grounds. We talked about writing–including our plans for future books and series–and got caught up with each other’s lives. (We both seem to have a problem getting out of the house and doing the fun stuff.)

Deborah in front of one the elephants heralding Aida at Glimmerglass.

Then, the opera. One of my favorite moments is when the lights are down, the conductor’s entrance has been applauded, and the first notes of the orchestra swell through the auditorium. It’s a moment so full of promise, it always gives me a chill. And yesterday’s performance lived up to that promise. The cast, mostly young, up-and-coming singers, showed me that there are exciting times ahead in Verdi singing. There wasn’t a single weak link. I particularly enjoyed the Aida of Michelle Johnson, one of the winners of the 2011 Metropolitan Opera National Council competition.

The production was a weird mishmash of ancient and modern. Aida is set in ancient Egypt, when that country is at war with Ethiopia. The love story is set against this backdrop of war and conflicting loyalties. Aida, an Ethiopian slave, is actually a princess, unbeknownst to her captors. She’s in love with Radames, the leader of the Egyptian army, who also loves her. Their relationship is complicated by the fact that the Egyptian princess, Amneris, also loves Radames. To my mind, the story is a universal one of love, conflicting loyalties, betrayal, and regret. We can watch it unfold in ancient Egypt and feel the characters’ emotions strongly in that setting. It doesn’t require updating to make it “relevant”–it already is.

That said, the production didn’t do much harm to the story, even though it didn’t add anything, either. There was a comical moment when the “sacred weapon” given by a priest of Isis to Radames turned out to be a gold-spray-painted machine gun. And the director, unfortunately, didn’t seem to trust the music to carry the drama. There was often too much “busy-ness” happening onstage at moments when the music called for a focus on a character’s quiet reflection. To me, not trusting the music is the greatest failing of modern opera directors. Because the music always tells you everything you need to know.

Still, my quibbles with the production were minor and what I was there for–the music–was wonderful. I thoroughly enjoyed it.

The day was fun and renewing, and the company was great. I’m going to have to find more opportunities to get out and play! 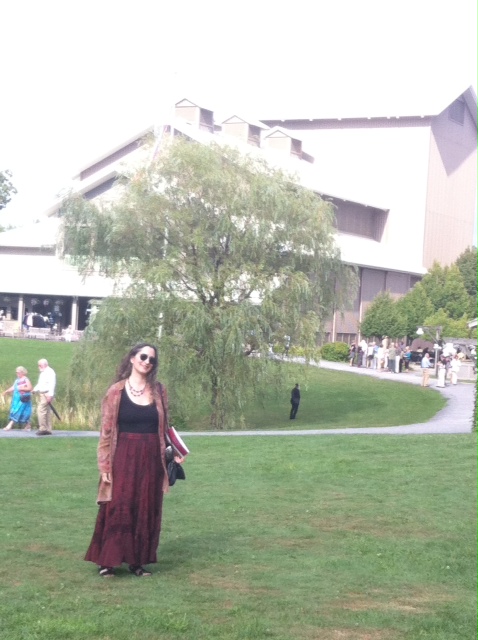 Deborah again, this time in front of the Alice Bush Opera Theater.